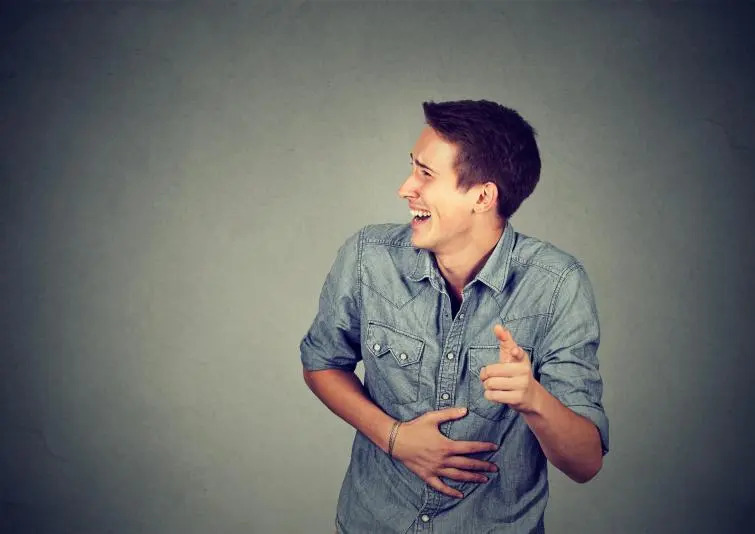 Here’s how psychopaths and narcissists use humour
Does your comic style match that of a psychopath, a narcissist or a Machiavellian…?

How would you describe your own comic style? Take a look at the list below, and think about which you like to use. Then read on to learn whether your profile matches that of a psychopath, a narcissist or a Machiavellian….

Fun – aimed at encouraging a good mood and companionship.
Humour – aimed at arousing sympathy for the shortcomings of fellow humans, while adhering to an accepting and serene world view
Nonsense – playing with incongruities and ridiculousness without any purpose
Wit – the ability to play with words and create clever thoughts
Irony – aimed at creating a mutual sense of superiority by stating things in opposition to their meaning
Satire – deprecating the bad and foolish
Sarcasm – based on being critical of others and conveying contempt
Cynicism – aimed at depreciating commonly acknowledged values
These style descriptions are all taken from a new paper in Personality and Individual Differences, reporting work led by Alberto Dionigi at Studio Psi.Co. in Italy.

I’m sure you’ll have noticed that there are some lighter, more sociable styles in the list, alongside darker ones. And when Dionigi and his team gave 715 adults a questionnaire that assessed their comic style plus another that measured their levels of the “Dark Triad” of traits, some patterns emerged. These were the clearest:

Machiavellianism was associated with greater use of irony and cynicism. “As Machiavellians are unscrupulous and intimidating, they may use humour as a means of manipulating others,” the researchers write. In fact, out of the three dark traits, Machiavellianism was most closely linked to irony. The team thinks that people high in Machiavellianism may use irony as a way to highlight other people’s weaknesses without the damage to their own social reputation that an outright attack on that person would incur.
* Psychopathy was associated with irony, sarcasm and cynicism. This fits with the profile of psychopaths as being aggressive and bullying, and low in empathy. “Higher levels of psychopathy are consistent with the malicious intensions of ‘laughing at’ humour,” the team observes.

Narcissism was associated with fun and wit. Clearly, neither is a “dark” comic style. So what’s going on here? Statistically speaking, the strongest link was with wit. As wit involves coming up with unexpected punch lines, the team argues that it can be viewed as an indicator of creativity — which is linked to intelligence. “Therefore, this form of humor can be seen as an ability that narcissists tend to show to impress and be admired by others,” they researchers write. It’s also possible, however, that as part of their inflated self-view, narcissists believe that they are witty and fun — but aren’t… As each individual’s comic style was self-rated, rather than independently judged, it’s impossible to know for sure.
It’s worth pointing out that none of the people in this study met the criteria for a diagnosis of clinical psychopathy, or had especially high levels of narcissism or Machiavellianism. As the researchers comment in their paper, it would be interesting to see similar work on a more extreme group, to know if the same patterns emerge.

It would also be interesting to discover whether there are differences in the comic style profile of someone who scores highly on the Big Five personality trait of “agreeableness” compared with narcissism, for example. Agreeable people might also favour fun and wit (rather than the darker styles), but are clearly very different to narcissists. So before you try to use someone’s comic style to inform your understanding of their personality, you should really know which styles are linked to other personality traits, too, not just the Dark Triad.

But in the absence of this knowledge, it’s still fascinating to think about how people who score relatively highly on dark traits might use certain styles of humour to be mean to others, or big themselves up — but without incurring the same social cost as outright bragging, open attacks or even physical aggression.